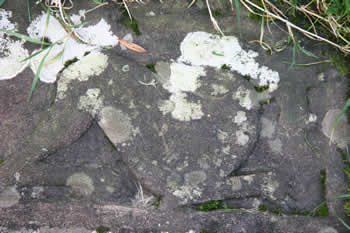 The story of  a horrific encounter that happened along the shores of Glenade Lake many years ago ago still puzzles and fascinates. What really happened back then or what secrets may still lie hidden under the placid waters of this Leitrim lake have never been fully answered.  The story is of a fierce struggle to the death between the Mc Loughlin brothers of Glenade and ‘that fierce brute the whistling Dobharchú.

The legend of the Dobharchú (Water hound) stems from the bestial murder of Grainne Ni Conalai at Glenade Lake on September 24th 1722.  The details were well known one time and the ballad sung at fairs on the streets of Kinlough.  Some say she went to the lake to wash clothes; the ballad tells she went to bathe.  When she failed to return, her husband Traolach Mac Lochlainn went to look for her.  He was aghast when he found her body lying by the lake with the ‘beast lying asleep on her mangled breast’

This and the chase that ensued would have little credibility today if it were not for the tombstone marking the grave of Grainne Ni Conalai  Although worn smooth and unclear now, it can still be seen at the old cemetery of Conwell near Kinlough, Co. Leitrim.  A carving on the moss-encrusted stone shows a strange beast being stabbed by a dagger. Local people claim a similar monument existed at one time not so far away in Kilroosk cemetery.  Broken and lost around 1922 it may have been the inspiration for the the Conwell memorial, or indeed evidence of yet another monster!

Cashelgarron stone fort, near where the chase ended and the Dobharchú met its gory end, still stands today nestled on a height under the sheltering prow of bare Benbulben’s head.  Both monster and horse are said to lie buried nearby.

‘By Glenade lake tradition tells, two hundred years ago
A thrilling scene enacted was to which, as years unflow,
Old men and women still relate, and while relating dread,
Some demon of its kind may yet be found within its bed.

It happened one McGloughlan lived close by the neighbouring shore,
A lovely spot, where fairies oft in rivalry wandered o’er,
A beauteous dell where prince and chief oft met in revelry
With Frenchmen bold and warriors old to hunt the wild boar, free.

He and his wife, Grace Connolly, lived there unknown to fame,
There, years in peace, until one day from out the lakes there came
What brought a change in all their home and prospects too.
The water fiend, the enchanted being, the dreaded Dobharchú.

It was on a bright September morn, the sun scarce mountain high,
No chill or damp was in the air, all nature seemed to vie
As if to render homage proud the cloudless sky above;
A day for mortals to discourse in luxury and love.

And whilst this gorgeous way of life in beauty did abound,
From out the vastness of the lake stole forth the water hound,
And seized for victim her who shared McGloughlan’s bed and board;
His loving wife, his more than life, whom almost he adored.

She, having gone to bathe, it seems, within the water clear,
And not having returned when she might, her husband, fraught with fear,
Hasting to where he her might find, when oh, to his surprise,
Her mangled form, still bleeding warm, lay stretched before his eyes.

Upon her bosom, snow white once, but now besmeared with gore,
The Dobharchú reposing was, his surfeiting being o’er.
Her bowels and entrails all around tinged with a reddish hue:
‘Oh, God’, he cried, ’tis hard to bear but what am I to do?’

He prayed for strength, the fiend lay still, he tottered like a child,
The blood of life within his veins surged rapidly and wild.
One long lost glance at her he loved, then fast his footstps turned
To home, while all his pent up rage and passion fiercely burned.

He reached his house, he grasped his gun, which clenched with nerves of steel,
He backwards sped, upraising his arm and then one piercing, dying, squeal
Was heard upon the balmy air.  But hark!  What’s that that came
One moment next from out of its depth as if revenge to claim!

The comrade of the dying fiend with whistles long and loud
Came nigh and nigher to the spot.  McGloughlin, growing cowed
Rushed to his home.  His neighbours called, their counsel asked,
And flight was what they bade him do at once, and not to wait till night.

He and his brother, a sturdy pair, as brothers true when tried,
Their horses took, their homes forsook and westward fast they did ride.
One dagger sharp and long each man had for protection too
Fast pursued by that fierce brute, the Whistling Dobharchú.

The rocks and dells rang with its yells, the eagles screamed in dread.
The ploughman left his horses alone, the fishes too, ’tis said,
Away from the mountain streams though far, went rushing to the sea;
And nature’s laws did almost pause, for death or victory.

For twenty miles the gallant steeds the riders proudly bore
With mighty strain o’er hill and dale that ne’er was seen before.
The fiend, fast closing on their tracks, his dreaded cry more shrill;
‘Twas brothers try, we’ll do or die on Cashelgarron Hill.

Dismounting from their panting steeds they placed them one by one
Across the path in lengthways formed within the ancient dún,
And standing by the outermost horse awaiting for their foe
Their daggers raised, their nerves they braced to strike that fatal blow.

Not long to wait, for nose on trail the scenting hound arrived
And through the horses with a plunge to force himself he tried,
And just as through the outermost horse he plunged his head and foremost part,
Mc Gloughlans dagger to the hilt lay buried in his heart.

“Thank God, thank God”, the brothers cried in wildness and delight,
Our humble home by Glenade lake shall shelter us tonight.
Be any doubt to what I write, go visit old Conwell,
There see the grave where sleeps the brave whose epitaph can tell.’ 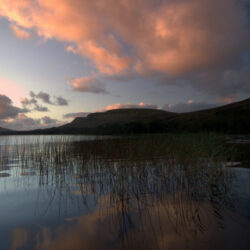 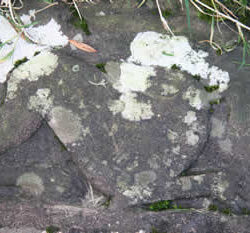 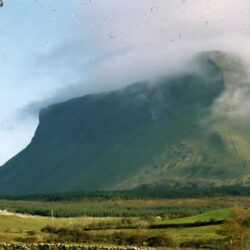