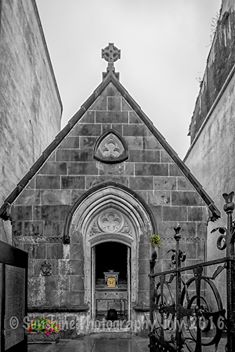 This tiny but exquisite memorial was designed and built in Carrick-on-Shannon as a burial place for Mary Josephine Costello, who died on October 6, 1877. She was 47 years old when she died. Her husband, Edward Costello, was a local trader. He had her body embalmed and placed with a nearby nunnery for safekeeping while the chapel was being built.
Completed in April of 1879, the dedication ceremony included a Requiem Mass for Mary. Her beautifully adorned casket was placed in a sunken area to the left of the entrance door covered with a specially made glass. Until 1897, Mass was said on every first Friday of the month in the chapel. When Edward died in March of that year, he was laid to rest on the right side of the chapel. The couple had no other family members.
Costello Chapel, the smallest in Ireland and the second smallest in the entire world, is 16 feet long and 12 feet wide. Nestled among more modern buildings in the town of Carrick-on-Shannon, its entrance is marked by two stone pillars topped by beautifully designed Celtic crosses. The Costello coat of arms is visible at the top of the gable, its Latin words translate to-“Seek not thyself outside thyself.” The entrance door is fashioned from decorative wrought iron.
Inside, the entire building is made from bath stone- there is no woodwork. The beautifully decorated marble altar sits in front of the single stained glass window. Between the two glass-covered burial sites stand panels of tiles showing scenes from the life of Jesus. When the dedication ceremony was planned in 1879, a special chalice was commissioned and used for the First Friday masses. It was passed on to St. Mary’s Roman Catholic Church following Edward Costello’s death. 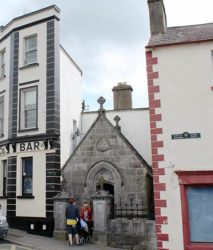 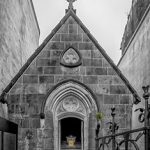