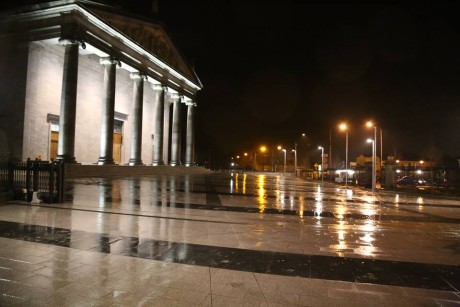 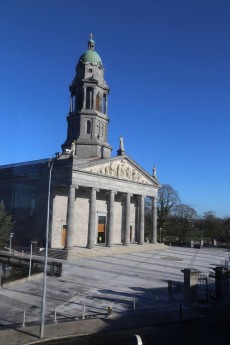 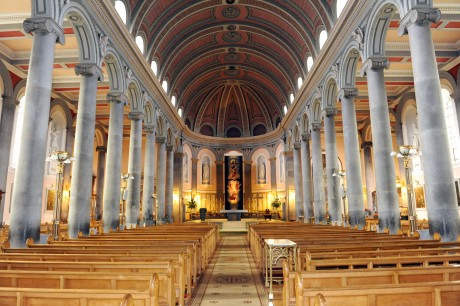 The historic Saint Mels Cathedral spire dominates the Longford town skyline. This building plays a vital role in the hearts of Longford people and has been the venue for many important events in County Longford since its foundation. The building of the Cathedral first took place between 1840 and 1856. The campanile was then added in the 1860s and the portico in the 1890s. The foundation stone for the Cathedral was taken from the original Cathedral of Saint Mels in the village of Ardagh County Longford, beneath which the revered Saint is reputed to be buried. The first Cathedral in Ardagh existed up until the protestant reformation of the mid 1500s. From 1788 the church in Ballymahon served as the Pro Cathedral with the bishop residing in the town until 1853. The Catholic diocese was without a cathedral for three centuries, up until the granting of Catholic Emancipation in 1829. In this year William O Higgins became the new Bishop of Ardagh and Clonmacnoise and it was his vision for a Cathedral that set the building of Saint Mels in motion.

As the largest town in the centre of the diocese, and being close to the ancient cathedral site in Ardagh,  Longford was the obvious choice for the building. The population of Longford at that time (1841) was 4966 and increasing. The town had two military barracks and the arrival of the Royal Canal in 1830 had contributed to the prosperity of the area. The parish was however in need of a new church in order to cater for the growing congregation. A resolution to build a new church was passed at a public meeting held on 27th January 1833. By 1838 a sum of almost two thousand pounds had been gathered by Longford parishioners and so on 6th May that year Bishop O Higgins announced that Longford would be the location of a diocesan Cathedral and the new residence of the Bishop.
The design envisaged by Bishop O Higgins was based partly on the Madeleine Church in Paris, the Pantheon and the Basilica of Saint John Lateran in Rome. The building commenced on 19th May 1840 with the laying of the foundation stone at a ceremony attended by as many as 40,000 people. Archbishop John MacHale of Tuam was the preacher. The architect employed in the first phase was John Benjamin Keane and the contractor was John Mullins. A massive fundraising campaign was taken on by all the parishes in the diocese as well as churches throughout Ireland and even in some parts of the UK. In 1842 cities in the United States and Canada also became involved in the fundraising.  A particularly interesting fundraiser which took place in the partly built cathedral was a charity sermon delivered by the Catholic convert and Passionist priest the Hon. Rev. Charles Spencer (1799 – 1864), an ancestor of Princess Diana and a relative of Winston Churchill. 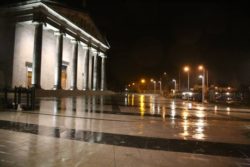 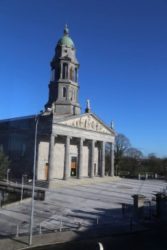 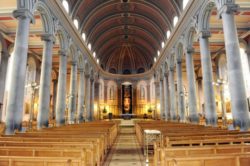